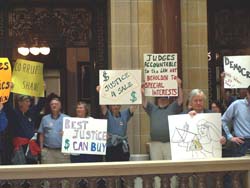 A crowd of over 30 people marched in front of the State Supreme Court chambers Monday afternoon, advocating for legislation that would clean up judicial elections in Wisconsin. Wisconsin Democracy Campaign director Mike McCabe says they were expressing their disgust with the cost of the recent State Supreme Court race and negative tone of the campaign.

McCabe helped organize the demonstration. He says the legislation due for a vote Tuesday in a Senate committee will bring the reforms the public is calling for. The bills are SB 170 and 171 . He says an impartial justice bill will get Supreme Court Races back under control by removing special interest money from the campaigns.

The legislation is is expected to pass the Senate, but McCabe says Assembly Republicans want to wait until after the budget to act on the bills. McCabe says he's fine waiting until later on this year to make the changes, but vows protesters will be back at the Capitol if the Assembly leadership fails to take action on the bills.