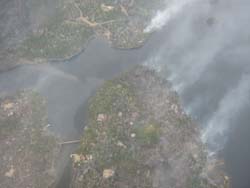 There's something in the air today around much of northern Wisconsin. The skies are hazy and smell like smoke, as the result of the 30,000 acre Ham Lake Fire in the Arrowhead Region of Minnesota. Dan Jones, a meteorologist with the National Weather Service in La Crosse, says the smoke is filtering into the region because of current weather patterns. Jones says the smoke should be around through tomorrow, until the weather is able to shift and blow it out of the region.

Jones says the smoke can actually be seen – if only faintly – on some satellite imagery. While forecasters are keeping track of it, it has little or no impact on the actual weather. Though, in some areas where it's thickest, it might limit temperatures by a few degrees.

As of Thursday, the Gunflint Trail Wildfire in northern Minnesota had burned 45 square miles, including dozens of homes.