You are here: Home / Packers / Packers to Celebrate 50th Anniversary of Lambeau Field 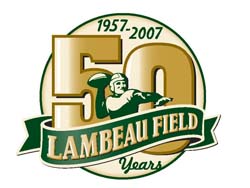 The Green Bay Packers announced plans to celebrate the 50th anniversary of the opening of Lambeau Field this season.

An anniversary logo was created to mark the occasion and it will be a prominent feature on many team items throughout the year.

Among the items that will feature the anniversary logo are the team's uniforms, Gameday Programs, the media guide and the Packers Yearbook.

Dedicated as City Stadium Sept. 29, 1957, with a 21-17 win over the archrival Chicago Bears, the team renamed the facility Lambeau Field in 1965 following the death of E.L. 'Curly' Lambeau, the Packers' founder and first coach.  It is the NFl's longest-tenured facility.