You are here: Home / Politics / Govt / Frankenstein veto ban gets a Capitol hearing 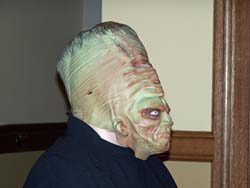 A proposed state constitutional amendment that would eliminate the governor's so-called "Frankenstein Veto" power received a Capitol hearing on Monday. The proposal strips away the governor's ability to re-write the state budget bill by crossing out words and creating new sentences.

State Senator Sheila Harsdorf (R-River Falls), a sponsor of the measure, says she supports the partial veto power, but also feels it has been abused by recent governors. Senate President Fred Risser (D-Madison) was quick to point out though that Republicans have stood on opposite sides of the issue in the past. During the hearing, he referred to how Republicans killed a similar amendment in 1993 when they took control of the Senate.

Senator Pat Kreitlow (D-Chippewa Falls) is among those who say they support the idea, but want it delayed until after the governor's current term in office ends. Kreitlow says lawmakers shouldn't try to "ham string" the governor in mid-term.

Government watchdog groups are questioning whether the amendment goes far enough. The Wisconsin Democracy Campaign's Mike McCabe says it doesn't kill Frankenstein and won't prevent governor's from stitching together language to create laws the legislature didn't intend to approve. McCabe says it's a good first step to ending the problem for good and will open the door to more sweeping action in the future.

However, Madison attorney Marilyn Townsend it's actually a step backward. She believes passing the amendment and putting it out for a public vote will only give them a false sense of security that something's been done.

The Assembly has already approved the amendment's second consideration and it's awaiting final approval in the State Senate. However, it's unknown at this time if it will get the final vote needed to put the measure out for a statewide referendum next spring. ( Wisconsin State Journal video editorial )