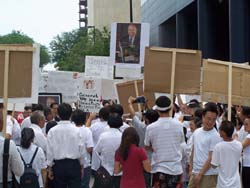 Hundreds of Hmong protest in Madison Monday, in support of General Vang Pao. Outside the federal courthouse, Hmong protesters ask the feds to drop charges against their popular leader. Spokesman Kou Vang says the Hmong are confused about the charges, since the U.S. government has a long history of supporting Vang Pao, going back to the Vietnam war. Vang Pao, who was recruited by the CIA to lead Hmong forces in Southeast Asia during the war, now stands accused of plotting to overthrow the communist government of Laos, and raising money from the U.S. Hmong community to do that. Kou Vang says most Hmong would like to see the charges dropped, and maintains only “a small faction” of Hmong do not support General Vang Pao. Meanwhile, the school board in Madsion is expected to reconsider a decision to name the Madison district's newest school General Vang Pao Elementary.