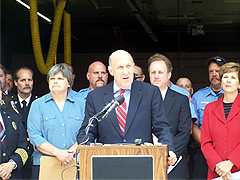 Governor Jim Doyle is denouncing the Republican budget plan passed by the Assembly.

Speaking outside a Madison fire station on Wednesday, Governor Doyle said Assembly Republicans passed a budget that cuts state services across the board. He says it's an extreme and irresponsible budget that works against the needs of regular Wisconsin families.

The Governor says Republicans cut schools by over $200 million, and their budget could also limit access to colleges and universities across Wisconsin. Doyle says Republicans turned their backs to children and veterans who want to pursue higher education and contribute to the economy.

Doyle also accused Republicans of protecting special interests, by cutting his $1.25 a pack increase on cigarettes and a tax on big oil.

The Governor also challenged Republicans to work together with Senate Democrats in conference committee to produce a budget both sides can agree on. Doyle says he'd like to see a finished budget as soon as possible.