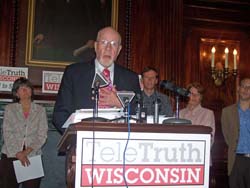 The proposed Video Competition Act is facing an uncertain future in the State Senate.

The legislation was passed by the Assembly, but is still awaiting action in the Senate. State Senate President Fred Risser (D-Madison) says he doesn't know if it will get a full vote in his chamber. Risser says the bill is still tied up in the Joint Finance Committee, which is focused on the budget right now. If it leaves that committee and heads to the Senate floor, it won't be until this fall.

The bill allows video providers to negotiate a statewide franchise agreement, instead of working with local governments. Risser says lawmakers seem divided on the issue, even in his own caucus.

However, Risser says opposition could grow after reports that lobbyists may have misrepresented public support. Lobbyists promoting the bill have been accused of giving a petition to lawmakers that lists residents from across the state as supporters. However, several have come forward saying they never agreed to have their names listed that way. The group TV4US, which circulated the material, says it doesn't know how opponents' names ended up on the list.