You are here: Home / Packers / Packers sign 4th round pick 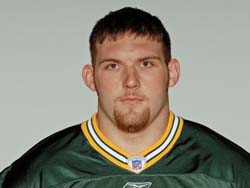 The teams fifth of 11 draft selections, Barbre was taken 119th overall out of Missouri Southern State, in the 2007 draft.

A consensus Division II All-America first-team selection in 2006, Barbre started 36 of 38 career games.  He was a first-team All-Mid America Intercollegiate Athletic Association honoree in 2005 and 2006.