You are here: Home / Health / Medicine / Take precautions against mosquitoes 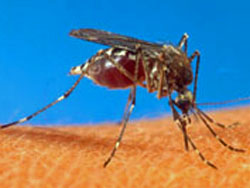 Wisconsin's mosquitoes are more than just an annoyance. A new study urges us to do more, to prevent mosquito bites and the medical problems that can bring, such as West Nile Virus. Dr. Jeff Davis is the state epidemiologist, and says many West Nile patients don't use repellent. In fact, nearly three out of four patients reported receiving mosquito bites within two weeks prior to onset of symptoms, but 49% of those patients reported never using repellent. Eighty two percent of statewide West Nile virus cases from 2002 through 2006 occurred in August and September. The study, published in the Wisconsin Medical Journal identified 114 confirmed cases, with seven fatalities. In addition to use of repellents, Davis says we need to make sure window screens are in good repair, and eliminate mosquito breeding sites like water filled tires.