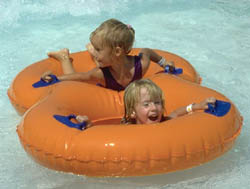 This upcoming weekend could be the last good one for a while.

Among other things, Labor Day weekend means many people will be spending as much time as they can with their family and friends outdoors before summer unofficial ends.

"The 'last blast of summer' is always a good way to put it. With the later school starting date that means the families get one more chance to go out and have some fun. The weather looks great, the gas prices seem reasonable. So we're geared for one last big push."

Jerry Huffman with the Wisconsin Department of Tourism says so far as they can tell, the Tourism industry did well for the summer season and Wisconsin will maintain its status as a premier travel destination. As for Labor Day weekend, Huffman says it has a big impact on tourism dollars.

"Economically it's hard to put a number on what this weekend per se means, but without a doubt it is absolutely one of the biggest of the year."

A few years ago, lawmakers changed state law so kids don't have to go back to school until after Labor Day weekend, giving families one last blast of summer together. Some of the hot spots in Wisconsin? … Well, Huffman says that depends on the weather.

"If the forecast is as mild and hopefully the rain is finally done for a while, it's gonna be a big weekend. Anything you can do outside, just sort of … summer's almost over … it's golfing, it's hiking, it's fishing, it's biking. It really is sort of an open invite to get outdoors and enjoy one last great Wisconsin weekend."