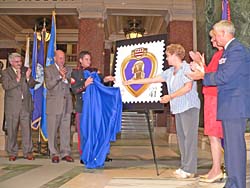 Originally issued in 2003, the U.S. Postal Service re-issues the Purple Heart stamp to honor the sacrifice of United States soldiers who have been killed or wounded in action.

Lt. Governor Barbara Lawton says the Purple Heart marks a solemn moment that defines a life of a solder that going forward will forever be different. Lawton says keeping this stamp in circulation keeps the reality of war present for all of us.

Speaking at the capitol rotunda ceremony, Madison Postmaster Paul Nistler says the new 41-cent stamp honors the sacrifice of our men and women in the military.