You are here: Home / Military / Wisconsin recognizes POWs and MIAs 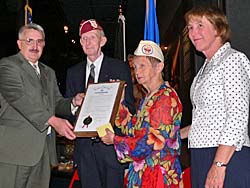 Wisconsin marks POW-MIA Recognition Day, and one prisoner of war recalls his experience.

More than 63 years later, Cliff Syverud of Madison still gets emotional when he talks about his experience as a prisoner of WWII. Syverud was shot down over Germany in 1944. He was interrogated, imprisoned, starved and beaten. Quoting a friend's testimony after surviving the Black Death March , Syverud describes their experience.

“For 86 days we marched in severe weather, starvation rations, slept in open fields and barns, in filth beyond comprehension of the American mind. Those miserable rations had less than 800 calories per day.”

He says they endured temperatures of 30 degrees below zero, they were bitten by dogs and bayoneted by Germans. Finally, they were rescued by an English tank unit.

“What a feeling to see the American flag again for the first time.”

Wisconsin Department of Veterans Affairs Acting Secretary Bill Kloster says the observance isn't like Independence Day when we celebrate with joy and pride in our nation.

Kloster says we owe so much to the men and women who serve our nation. He says for many of our POWs, even after many years, the pain of captivity does not entirely end.

“They carry the scars of war, both physically and emotionally. The passage of time has not healed all their wounds nor can it diminish the magnitude of their sacrifice.”

Kloster says it's hard to imagine how disorienting and lonely it is for someone to be separated from his comrades. Veterans Secretary John Scocos is serving in Iraq, and today's observance is close to his heart, as his own father was a prisoner of war during WWII. There are still 88,000 soldiers considered missing in action dating back to WWII.

Related stories:
POWs and MIAs are recogonized today
POWs are recognized in Wisconsin