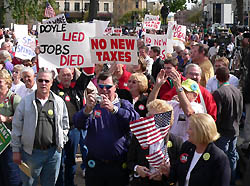 A huge crowd rallies at the state capitol against a new budget with higher taxes.

"We should not, we must not, and I will not raise taxes."

That campaign promise from then-gubernatorial candidate Jim Doyle is played repeatedly on the sound system prior to the Americans for Prosperity anti-tax rally. Member Tom Tiffany drove to the capitol city all the way from Rhinelander.

Radio talk show host (WSAU) Pat Snyder made the long drive from Wausau, saying all kinds of people from both political parties call his show with a common theme. He says they are seeing more of their hard-earned dollars going to government without proper accountability for their spending. Snyder says he can't go to the governor's office to complain.

"You know I'd be in the Governor's office, but since I'm not a trial lawyer, or a member of an Indian tribe or part of WEAC (Wisconsin Education Association Council), I'm not welcome!"

Capitol Police estimate that there were about 350 participants at the rally, with about 800 members of AFSCME (American Federation of State, County and Municipal Employees) in the counter-rally.

There was another reminder from the group of what candidate Doyle said during his run for his first term as governor. "Wisconsin's problem is not that we tax too little, it's that we spend too much."

Wisconsin's budget is over 108 days late.