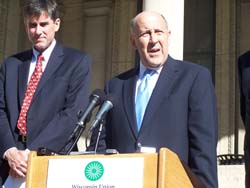 The Governor plans to call a special session of the Legislature to deal with the state budget impasse.

Passage of a state budget is now 100 days overdue, and Governor Jim Doyle says lawmakers can no longer delay. Doyle says if lawmakers can't reach an agreement by Monday, he'll order both chambers to be in session to take up a compromise bill he plans to introduce later this week.

The Governor says the latest budget bill will include many of the agreements that have already been reached by legislative leaders during negotiations. Those include a $1.25 increase in the cigarette tax, removal of Senate Democrats' Healthy Wisconsin plan, and about $300 million in spending cuts. The plan would also set the transportation budget aside to be taken up separately.

Even if the Governor calls a special session for next week, it's unclear if Republicans in the Assembly will back the compromise bill. Doyle is hopeful that Republicans in that caucus will recognize the serious problems the state will face if Wisconsin continues to operate without a budget.