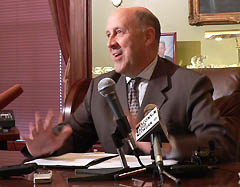 Because of the budget impasse, the Governor warns that we could see a partial shutdown of state government.

Just one day after the state Assembly voted against his new budget proposal, Governor Jim Doyle says a partial shutdown might be needed in order to "plan for the disaster" caused by the inaction of the legislature.

"In order to fund essential services that are needed to protect the health and safety of Wisconsin residents, a partial shutdown may well be necessary."

Doyle doesn't eagerly elaborate on plans of a government shutdown, saying he doesn't want to unnecessarily scare people, but he does say that no budget means property taxes will go up. As he prepares for shutdown, the governor is calling on his cabinet secretaries to discuss what a shutdown would mean to government services. Doyle adds the state could lose lot of federal dollars.

"By the way, without a budget we lose 400- to 500-million dollars of federal money that we don't get because we don't have a budget. And I'm not talking about the hospital assessment money even – that's another 600-million. So there's, you know, close to a billion dollars in federal money that's on the table here that's ready to just disappear if you don't have a budget."

Assembly Republicans want to have an extraordinary session of the legislature to pass separate funding bills for public education and local government to avoid higher property taxes. Over 108 days late, Wisconsin is the only state in the nation not to have passed their budget.