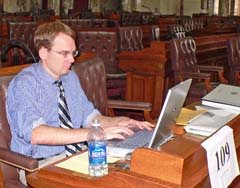 The state budget is now 110 days late, and lawmakers rejected the latest proposal from the Governor earlier this week. As a result of continued delays, State Representative Tom Nelson (D-Kaukauna) says he's not leaving the Assembly floor until the budget is done. Nelson plans to remain at his desk or in the chamber 24 hours a day, 7 days a week, until a budget is passed by the both the Assembly and the Senate.

The Kaukauna Democrat hopes his protest will inspire lawmakers to take action. He's welcoming any of them to stop by and join him, even if they can only spend a short amount of time there.

Nelson says he will continue to serve the people of his district during the sit-in. He's armed with his laptop and is trying to get a phone line at his desk so he can take calls from constituents.

Assembly Sergeant-at-Arms Rick Skinrud says this is the first time he can recall a lawmaker doing something like this. Skinrud says there are no rules against what Nelson is doing, and the respresentative is welcome to remain on the Assembly floor for as long as he wants. However, he says the doors to the chamber will be locked every night at six, which is standard procedure when the Assembly is not in session.