You are here: Home / News / Sky falling on Wisconsin budget? 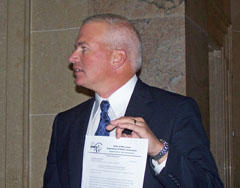 The state Senate's minority leader issues yet another call for K-12 funding. Senator Scott Fitzgerald says, with an October 15th deadline now looming to get state budget numbers out to school districts, it's time for the state Senate to act. “We've got to get something passed on schools,” says Fitzgerald.” We are up against a brick wall.”

The Assembly has passed a separate funding package for K-12, and state Superintendent Libby Burmaster confirms October 15th is the date by which she must send state budget numbers out. If that doesn't happen, Fitzgerald says districts will be forced to work off last year's numbers, and that means property tax hikes. And, Fitzgerald says Doyle and his cabinet members are going to be spinning “Chicken Little stories” about other parts of the budget.