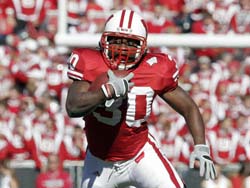 Wisconsin Badger Freshman running back, Zach Brown, was named the Big Ten's Co-Offensive Player of the Week Monday after rushing for 250 yards and two touchdowns in Wisconsin's 41-34 win over Minnesota.

Brown averaged 8.6 yards per carry and recorded the fourth-most yards in a game by a true freshman since Ron Dayne's 339 against Hawaii in 1996.  It's the first Big Ten weekly award for Brown, who shared the award with Ohio State's Chris Wells who set career marks rushing 39 times for 222 yards and scoring both Buckeye touchdowns in OSU's 14-3 win over rival Michigan.