You are here: Home / Badgers / Badgers' Connelly is WCHA's Defensive Player of the Week 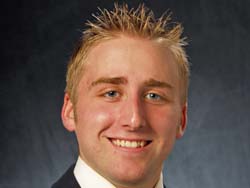 University of Wisconsin goaltender Shane Connelly, who stopped 74 of 77 shots on goal and recorded his fifth collegiate shutout in a conference series split against visiting North Dakota last weekend, has been named the WCHA Defensive Player of the Week.

Connelly had a 43 save shutout, including 25 stops in the third period, in Wisconsin's 4-0 win over the Fighting Sioux last Friday (Nov. 9) night at the Kohl Center.

The honor is the first for Connelly.  He and the Badgers play at Colorado College this weekend.