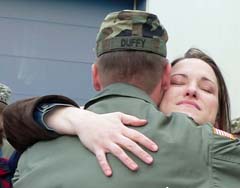 The final group of Army Guard Aviators are back home after serving a year in Kosovo. About 30 soldiers from the Wisconsin Army National Guard's 1st Battalion, 147th Aviation, wrap up their 16-month tour of duty in support of NATO peacekeeping and stabilization efforts in Kosovo.

Major Max Brosig says having the support of family made things much easier for all the soldiers overseas.

“You the families have committed 16 months of your lives in support of your soldier while they defended our country and support of the Global War on Terror. We thank you for all the numerous packages, letters and emails.”

“We'd use the web cam maybe, if we're lucky, once a month. We kind of gave up on that and just started doing email. It was easier.”

In addition to family members, returning soldiers were greeted by senior officials with the Guard as well as Governor Jim Doyle.

“Welcome back to Wisconsin. We greeted you with a good November day. It's been pretty nice here up until today, but we're giving you … you're coming back to what November in Wisconsin is supposed to be about. Welcome home. Thank you for a job well done. Thank you.”

The soldiers left Wisconsin July 18, 2006. About 50 other battalion soldiers had returned home from Kosovo last Friday.