You are here: Home / Politics / Govt / Getting passionate over the Capitol tree 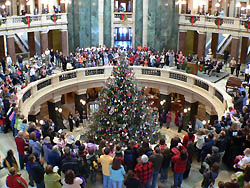 A committee hearing over the naming of a tree gets a little testy at the state capitol.

State Representative Marlin Schneider (D-Wisconsin Rapids) pushes legislation that would bring back the Christmas tree to the state capitol, rather than what he calls the cheapened and thoughtlessly re-named politically correct holiday tree.

The Wisconsin Rapids Democrat says renaming the tree is just as absurd as calling the Jewish Menorah the holiday candle.

However, Annie Laurie Gaylor of the Freedom From Religion Foundation testifies that we need to keep a separation of church and state, and besides, she says, the tree doesn’t even need a name.

Meanwhile, State Representative Joel Kleefisch ( pronounce ) (R-Oconomowoc) asks Gaylor whether changing the name actually changes what the item really is. The Oconomowoc Republican questions Gaylor’s acceptance of the word “holiday,” which he says means “holy day, representative of Christmas, the holiest day in the Christian calendar.” And then …

“…and I will concede to you that you won’t be happy until we have a Godless world,” he says.

Kleefisch adds Gaylor is asking for “an unreasonable degree of political correctness.”

The tradition of displaying the tree in the state capitol began in 1916 before the capitol was even completed. The name was changed in 1985 to ‘Holiday Tree.’