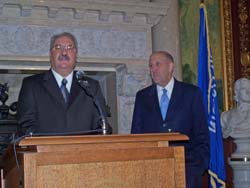 Governor Doyle has appointed a new Secretary of Commerce.  Developer Jack Fischer has been named to take over the Department of Commerce. The 54-year-old Appleton resident says he's looking forward to improving Wisconsin's business sector and will work "extremely hard" to help the state attract new businesses and expanding the ones already here.

Fischer is currently president of the Fischer Group companies, which focus on developing retail mall, offices, and residential housing projects. If confirmed by the Senate, Fischer will replace former Secretary Mary Burke, who left to focus on her non-profit work.