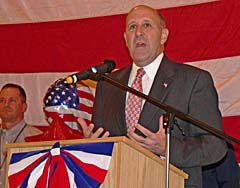 Several Midwest governors and the premier of Manitoba sign a greenhouse gas reduction agreement in Milwaukee.

The leaders agree to a regional strategy to reduce greenhouse gas emissions, encourage the use of renewable power, and develop new fuels to compete with foreign oil. Wisconsin Governor Jim Doyle is Chair of the Midwestern Governors Association .

"We call for much more aggressive actions moving out into 2020, 2025, 2030, not only in renewable fuel, generation of electicity and motor fuel, but also these are some very significant calls for conservation."

Doyle says this plan offers great economic opportunities for citizens, including researchers, technicians, farmers and manufacturers. He says it's important to reduce carbon emissions with the use of clean coal technology. but as for nuclear power…

"I'm very confident that the very first new nuclear power plant in the US will not be built in Wisconsin. It will be built someplace else. There are a number of permits that are out there around the country and I think when a new generation nuclear plant is built it's going to ingender a lot of discussion in states around the country … kind of what does it look like and how safe is it."

The plan also calls for a third of all gas stations to sell E-85 ethanol fuel by 2025. And 30% of Midwest electricity would come from renewable sources by 2030. The governors say citizens need to participate, by using flex fuel vehicles, getting a home energy audit, and getting involved in the community with public discussions.