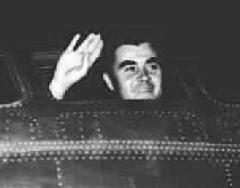 America loses another member of the Greatest Generation .

Probably best known as the guy who dropped the atomic bomb over Japan in 1945, General Paul Tibbets was no stranger to Wisconsin. The World War II pilot appeared in Oshkosh several times for EAA's AirVenture , the world's largest aviation event.

EAA Spokesperson Dick Knapinski recalls, whether it was for a book-signing or to talk to the crowd about his mission with the Enola Gay , Tibbets always drew fans of all ages wanting to hear directly from a piece of living history.

"Aviators, I think, above all are dreamers. They dream of the airplanes they'd like to fly, or may have had the opportunity to fly – to revisit those airplanes, or see what kind of gadgets or innovations might go in their own airplane back home."

Knapinski says whenever Tibbets was at the Oshkosh event – as recently as 2004 – he was just like any other pilot on the grounds.

"He loved to look around, he liked to look at what was new, what was exciting, what was on display, and meet with fellow aviators. And I think that's part of the magic up here at Oshkosh at AirVenture … that someone like a Paul Tibbets who's internationally known could meet with a pilot who is not so well known. And yet they have a common language of flight."

Paul Tibbets ( photo ) died at his Ohio home on Thursday at the age of 92.

NOTE: Gerry Newhouse, a friend of Tibbets, said the pilot had requested that there be no funeral or headstone for him, because he feared it would give his detractors a place to protest. ( legacy.com )