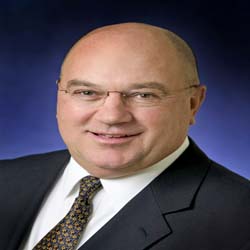 Milwaukee Brewers Special Assistant to the General Manager/Director of Amateur Scouting Jack Zduriencik (pictured) was named Major League Executive of the Year by Baseball America.  He will be honored at the Seventh Annual Baseball America Awards Gala in Nashville, Tennessee this afternoon.

Zduriencik is the first non-general manager to be recognized as the recipient of this award, which was first presented in 1998 to current Brewers Executive Vice President and General Manager Doug Melvin (then with Texas).  Zduriencik has spent the last eight seasons in the Brewers organization after joining the club on October 25, 1999.  In his role, he directs all amateur scouting efforts for the Brewers, both domestic and international.

Third baseman Ryan Braun will also be recognized today by Baseball America as the Major League Rookie of the Year.