You are here: Home / Military / Kind has good, bad news from Iraq 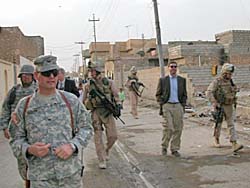 A US Representative from Wisconsin brings home both good and bad news from Iraq.

Congressman Ron Kind (D-La Crosse) says his fourth trip to Iraq was incredibly worth while and constructive. The La Crosse Democrat says he was both encouraged and discouraged.

"I was encouraged with the reduction in violence that we saw in Iraq, but discouraged that it hasn't been matched with any significant political progress that has to occur if there's any chance for a peaceful outcome in Iraq."

Kind met with many of the Sunni and Shiite leaders, but says those meetings didn't leave him very hopeful.

Kind says in order for there to be any sustainable progress in Iraq, tough political compromises have to be made, but he says there's been little willingness to do that. Kind says one problem is that neither the Sunni leaders nor the Shiite leaders have much trust in the current Iraqi government. Kind admits policymakers, such as himself, must ask 'how much more must we give?'

"Given the fact that we've been there for five years now, a trillion dollars, 3-thousand lost lives, over 30-thousand soldiers maimed and injured, how much more should the American people invest in both lives and resources hoping that at the end of the day there's going to be some peaceful settlement in Iraq?"

Kind was also encouraged by the high morale from U.S. troops, and he is very impressed with General David Petraeus and his abilities, but says he's been put on the job four years too late.