You are here: Home / Military / Kind: US troops in Iraq are well, but tired 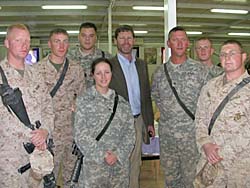 After spending time with Wisconsin troops in Iraq, one lawmaker says they're doing well, but they're also tired.

US Representative Ron Kind (D-La Crosse) says when you have a reduction in violence and better infrastructure, it really makes the mission a lot easier. The La Crosse Democrat, who just returned from his fourth visit to Iraq, says he was encouraged by the soldiers' high level of morale. However, he adds, those serving their second or third tours of duty are feeling the stress.

"Iraq has certainly brought our military to the point of breaking. We are stretched very thin. And I don't think we could sustain the level of military involvement that we currently have in Iraq for much longer."

Just this week, more than 34-hundred men and women around the state were put on alert for possible deployment in 2009. Kind says that doesn't necessarily mean the war can't end sooner than that.

"Well just being put on alert and actually being called up — being reactivated — are two different things. And this is kind of normal operating procedure. They want to give these units enough leeway in order to get them battle ready. So, 2009 is a long time away and it's tough to predict what the situation's going to look like next spring, let alone a year and a half from now and these things can change."

Kind says General David Petraeus' 'hearts and minds' battle — communicating one-on-one with the Iraqi people — is starting to pay dividends. If Iraqi security continues to increase and violence decrease, we could see a dramatic reduction in our military presence by the end of next year. Kind says it's time to "take the training wheels off of the Iraqi government." He says the United States cannot continue babysitting this nation forever.