You are here: Home / Politics / Govt / Firm that mailed out SSNs promises help 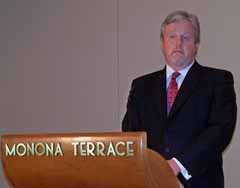 An executive with the company responsible for a mailing that included the Social Security numbers of thousands of state residents hopes to reassure those affected. Sean Kenny is a vice president for Texas-based EDS , which has contracted with the state of Wisconsin for some thirty years. Kenny brought his company's apologies to a press conference at Madison's Monona Terrace. “We take our responsibility in Wisconsin very seriously,” said Kenney. “And we take this matter very seriously and regret that it happened.”

What happened was an EDS prepared mailer that went out to 260,000 Medicaid, SeniorCare and BadgerCare members around the state included their Social Security number on the address label. “We have a very stringent quality control process in place,” said Kenney. “This was a mistake made by an individual, it was not a systemic mistake.”

Kenny says EDS will provide credit monitoring and identity theft insurance to state residents who received the brochure. He emphasized that at this point, there've been no reports of any illegal activity associated with the incident.