You are here: Home / Environment / Conservation / Great Lakes compact may yet get done 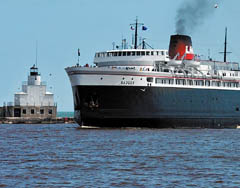 Lawmakers are still working on a document to protect the Great Lakes. Governor Jim Doyle included legislative approval of the Great Lakes Compact in his State of the State “wish list.” Green Bay state Senator Rob Cowles says lawmakers will do their best. “Legislators that have been focused on this realize that it may not get done, because its a complicated bill, and we just might run our of time,” says Cowles. “On the other hand, you might have a special session . . . to focus on this.”

Cowles says all parties involved understand that the Great Lakes are a finite resource. Approval of the Great Lakes Compact may actually have better chance of making it to Doyle's desk than do the other two items he mentioned: a statewide smoking ban and an increase in the state minimum wage.