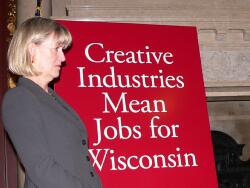 Wisconsin's new film incentives are working, as two new movies are set to be filmed in our state.

Lt. Governor Barbara Lawton is back in the Badger State after visiting the Sundance Film Festival in Utah, to promote Wisconsin's new film incentives. Lawton says Fletcher Camera, a national leader in camera equipment, will open an office in Milwaukee.

"And with Fletcher moving into Wisconsin and developing a foothold here and actually opening an office and employing Wisconsin people here. We see the beginning of building the infrastructure that will be there to gird growth in the industry."

"Wisconsin was introduced as having one of the most competitive packages and that they were very excited to bring it."

Lawton confirmed that a $1-million independent film called, "The Violinist" will film entirely in the Green Bay area, and thriller "Blue World" will spend its $2.5-million budget filming in Milwaukee.

Lawton says she was met with a buzz about Wisconsin's tax breaks for the movie industry. She says it started with an article in the Hollywood Reporter about Wisconsin becoming the "Third Coast" in the film industry.

"There's the East Coast and the West Coast and Wisconsin is going to be the Third Coast in the film industry."

Lawton credits the Wisconsin State Arts Board (WAB) for the recent developments. As chair of the Board, she says the group will seek to boost its funding to $1.00 per capita in Wisconsin. As for Johnny Depp filming a major budget movie in our state, there's still no confirmation on that.