You are here: Home / Health / Medicine / A partnership to fight chronic disease 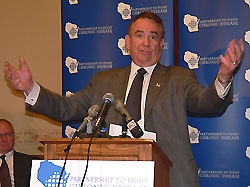 A new coalition aims to get policymakers to reduce and prevent preventable illnesses to save lives, misery and money.

The Partnership to Fight Chronic Disease wants to make chronic diseases a key issue in the race for the White House. Wisconsin co-chair Tommy Thompson says we have about seven years before the health care system collapses, so we need to fix it.

The former US Health Secretary and four-term Governor says businesses across the country can offer incentives for their employees to take better care of their health, such as offering smoking cessation programs and workout facilities. Also Thompson explains, large corporations with cafeterias should subsidize the good food.

“You know if people come in and have the fruits and the vegetables and a salad, charge them a buck or subsidize it and give it away. And then have the other line where it's high fats … five bucks for a hamburger, ten bucks for a cheeseburger and 20-cents for a French fry. It will change human nature dramatically.”

Thompson says one of the most important issues facing all of us as Americans is the cost, affordable and accessibility of healthcare. He says chronic illnesses come at a cost of hundreds of billions of dollars to the health care system. The three biggest contributors are tobacco, diabetes and obesity.

Thompson says we all need to take some individual responsibility, like eating right, exercising, and drinking and smoking less. Thompson jokes, there's no law requiring you to eat everything on your plate.

The Partnership to Fight Chronic Disease consists of a coalition of about 110 groups nationwide.