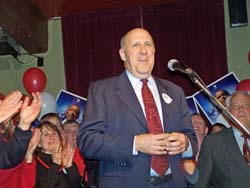 Governor Jim Doyle says Barack Obama's win in Wisconsin shows the people of the state are hungry for change. Speaking to a crowd of Obama supporters gathered in downtown Madison Tuesday night, Governor Doyle offered his thanks for helping the Democratic hopeful win the Badger State. Doyle says Obama brought inspiration to Wisconsin, and the people of the state responded.

The Governor says the win shows what Obama was able to accomplish in just one week of campaigning here. The Senator from Illinois made a sweeping tour of Wisconsin, including a rally in Madison last week that drew over 17,000 people.

Doyle urged supporters to celebrate the victory…but to also keep the future in mind. He says Wisconsin is frequently a battleground state, and he does not expect that to change in this election.