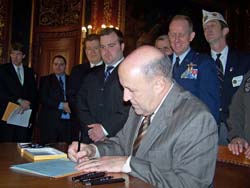 A new state law is aimed at making sure Old Glory is made in the USA.

Legislation signed by the Governor requires American flags displayed in public places to be made in this country. State Senator Jeff Plale (D-South Milwaukee), a sponsor of the measure, says it's an issue many people may not think about, but it is important to many people. The law does not impose any penalties if it is violated.

The bill was one of nine signed by Governor Doyle Monday. The Governor says the new laws help to honor the work of service members and veterans from Wisconsin, and the sacrifices they've made while serving around the world.

The legislation signed by the Governor includes a bill to prevent employment discrimination based on military obligations, another allows for gold star license plates for the families of fallen soldiers, and several measures create memorials to military units from Wisconsin.