You are here: Home / News / It's Game Day For the Badger Men's Basketball Team 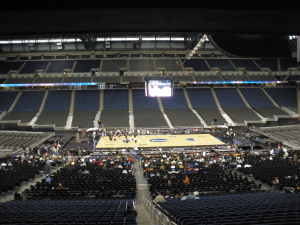 After a week of hype, the Badger men's basketball team will finally take the floor  in the Midwest Regional Semifinals at Detroit's Ford Field.  More than 60,000 people are expected to fill the football stadium for the semifinal matchups that feature the Badgers and Davidson and Kansas and Villanova.

Both teams had to use Thursday's shoot-around to get used to the large facility that will feature the floor right at the 50-yard line rather than toward the end zone as the NCAA had previously set up their basketball games in dome stadiums.

The Badgers ride into tonight's matchup at 31-4 while Davidson has won 24 straight games and bring a 28-6 mark into the game.

The winners of tonight's semifinals will meet on Sunday afternoon in the Regional Final.  The winner of that games goes to the Final Four in San Antonio.

Listen/Download: Mike Heller has a game preview in Detroit. :58