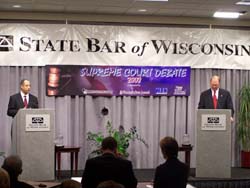 Negative campaigning takes the spotlight at a debate between the two candidates for the state Supreme Court. The debate, co-sponsored by WRN, took place Tuesday night at the State Bar of Wisconsin in Madison.

Challenger Judge Michael Gabelman argued that the backgrounds of both candidates should be fair game in the race.

An ad from Gabelman's campaign has been criticized as distorting the facts of a case from when incumbent Supreme Court Justice Louis Butler was a defense attorney. Butler says the ad never should have aired. He called the ad “disgusting and embarrassing.”

Both candidates did take aim at special interest groups that are running attack ads against each of them. Gabelman says those groups can “take their interest elsewhere.” Butler says the race would be better off without them and urged voters to rise up and reject those kinds of ads.

The candidate also addressed the growing role of special interest spending in Supreme Court races. The topic has some people calling for a change in how justices are selected, including one lawmaker who wants the Governor to appoint them. Justice Butler says the decision should stay with the voters, a sentiment Gabelman agreed with.

Both candidates face each other in an election being held April 1st.