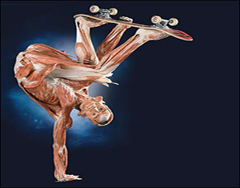 If you plan on seeing the Body Worlds exhibit, you better do it now because time is running out.

People from all corners of the Badger state, as well as from our neighboring states, are pouring-in to see the display of real human bodies. In the final weeks of the Body Worlds exhibit, the Milwaukee Public Museum has extended hours to accomodate visitors.

“It's just been a huge success for the Musuem and our community and the state of Wisconsin, as well.”

Mary Bridges, marketing director of the Museum, says the exhibit is a great boon to the economy. Since its arrival January 18, the Body Worlds exhibit has broken the Museum's previous attendance record for a traveling exhibit of nearly 183,000 visitors, already reaching the goal of 300,000 visitors.

“We are just drawing fantastic audiences in comparison to markets our size that have had this exhibit. It's exciting that the people of Wisconsin are yearning for this educational, scientific information that we can bring to them.”

Bridges says the human body exhibit is not only piquing the interest of first time visitors, but because admission to the Body Worlds exhibit gets visitors into the entire Museum, parents are bringing their kids to the place they explored as youngsters. She says they've even had some celebrities stop by while they were in town.

With the popularity of this traveling exhibit, how can the Museum possibly top this? Bridges believes the Titanic exhibit, which opens in October and runs through Memorial Day of '09, will be equally as successful.

To accommodate curious guests with hectic schedules, the Museum is now open from 9am to 9p.m. daily, but beginning on Friday the 30th at 9am, the Museum will stay open for an unprecedented 63 consecutive hours, ending at midnight Sunday, June 1st.