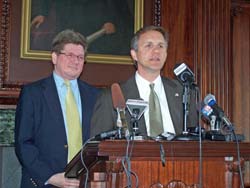 After months of negotiations, Assembly and Senate leaders emerged Monday with an agreement on how to repair the state budget. Assembly Speaker Mike Huebsch (R-West Salem) says it will close a $527million hole in the current state budget and prevent government from operating a deficit.

The measure does not include a proposed hospital assessment, which Democrats and the Governor have argued is needed to recapture federal Medicaid dollars. It also does not include the Great Lakes Compact, which will be taken up seperately.

The bill is expected to face some opposition in the Republican-controlled Assembly, but minority leader Jim Kreuser (D-Kenosha) says Democrats will help bring the votes needed to pass it.

Swift action is expected as well, with passage due by the end of this week.