You are here: Home / Military / Memorial Day: 'May we always remember' 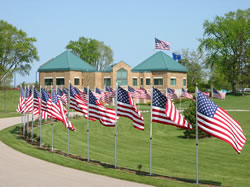 On this Memorial Day , don't forget to take a break from your yard work, put down that beer and remember our veterans.

It's a day of national observation and remembrance for those men and women in the military who never came back home – those soldiers who have made the final sacrifice for this country.

"Our veterans, especially those who gave their lives on distant battle fields, on seas and in the air, did not seek glory any more than they sought the horrors of war. All they ask is that their deeds are remembered, their sacrifice acknowledged and a legacy maintained. Our veterans' cemeteries perform that mission."

Wisconsin Department of Veterans Affairs Secretary John Scocos ( pronounce ) encourages us to pause for a moment and think about the veterans who died for their country and for those who are currently in harm's way. Americans are asked to take a moment of silent contemplation for the National Moment of Remembrance at 3:00pm to remember our war dead.

"Whatever they're doing just stop, or think in their mind if they're driving, that today honors and memorializes those who've made a tremendous sacrifice for us and our nation and our state that we can do so many of the things that we take for granted every day."

Scocos says, he's also thinking of the mothers and fathers and the families of our fallen soldiers around the world. He says, for many families, Memorial Day marks the day they buried part of themselves. On this day a year ago, Scocos was serving in Iraq. This year, he says, he's participating in several Memorial Day ceremonies throughout the state. Also, Scocos says, he plans to spend time with his family and visit the gravesite of his dad, who was a veteran.

NOTE: The Wisconsin Veterans Museum on the Capitol Square is open Memorial Day from 9:00 a.m. to 4:30 p.m.