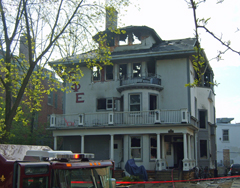 Intense flames lit up the overnight sky in downtown Madison as the Sigma Phi Epsilon fraternity house on the UW campus was destroyed in a masive fire. A Madison Fire Department spokeswoman said a police officer driving past the house on a normal patrol around 11:30 p.m. Monday spotted a glow in the rear of the house and reported the fire. She then helped evacuate the building, which houses 25 people. The three-story house was also equipped with a fire protection system, which alert residents to the blaze. The residents got out safely. A firefighter was injured. Flames could be seen for blocks at one point, and the fire burned for more than four hours.

The Red Cross and UW-Madison Dean of Students Office is helping the fraternity members with clothing, food, and temporary housing, as needed. This is finals time at the university. The students lost everything in the fire — books, notes, and computers. The same house was seriously damaged by a fire in June 1999. Fraternity members are vowing to rebuild their home, which is nothing more than a roofless wooden shell at this point.