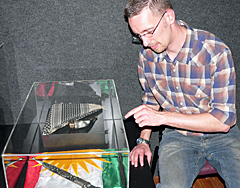 A reception is held in the capital city for veterans of the conflicts in Iraq and Afghanistan.

The Wisconsin Veterans Museum wants input from those service members for an upcoming museum exhibit called "Faces in the Sand."

Jeff Carnes served during Operation Iraqi Freedom in 2003. As a volunteer with the Museum, he explains how they are seeking first-hand accounts of veterans' experiences, in hopes of tying it all together with donated items to put on display in 2009.

"Their letters, their photographs, as well as all the objects, memorabilia that they brought back … to give a whole total package so that the average civilian can see what a Wisconsin soldier, both in active duty and in Reserves and National Guard, went through in their experiences in Iraq and Afghanistan."

The goal is to obtain some of that history for recordation, before the artifacts get lost or the stories are forgotten. Carnes is an Arabic linguist, and has a pretty good story of his own from his tour of duty.

"One of the things I got to do was go into the house in which Uday and Qusay – Saddam Hussein 's sons – were killed. And to be able to go through all the documents, see if there was anything of interest that was left in the house after half of it was blown away."

When Carnes learned of the future exhibit, he didn't waste any time making his donation.

"I got to bring a Kufiya or Shemagh which is the head scarf that Iraqi men typically wear – the black and white checked garment."

Veterans met with fellow G.I.s at the Museum Thursday evening, they were able to get acquainted with the programs at the museum, and learn more about the benefits available to them as part of the initiative " Mission: Welcome Home ."