You are here: Home / News / DOT implements plan to ease I-94 detours 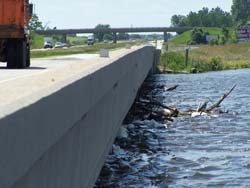 A major transportation route across southern Wisconsin could be reopened by the end of the week.

Rising water levels on the Rock and Crawfish Rivers have forced about 10-miles of westbound Interstate 94 to be closed for nearly a week. That's resulted in lengthy detours for many motorists, with many having to travel to I-43 to get to their destination. Department of Transportation Secretary Frank Busalacchi says it's been a frustrating time for motorists and the state.

Busalacchi says the state has signed an emergency contract to build a temporary crossover on I-94, where west and eastbound traffic will join up for a five-mile stretch of road. The Secretary says the joined lanes will still slow traffic down, but will still make it much easier for vehicles traveling west. The east bound lanes of I-94 are raised slightly higher, and are not currently in danger.

Busalacchi hopes to have the new route open by the end of the week.

The state is spending $896,000 to build the alternate route.