You are here: Home / Crime / Courts / Massacre house to be razed 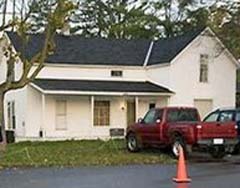 The house where last fall's tragedy unfolded in Crandon will be coming down this weekend. In October, off duty officer Tyler Peterson killed six young people and wounded a seventh at a home on Hazeldell avenue. Peterson later killed himself. Memorial Committee Chair Bill Farr says in preparation for removing the house, a prayer vigil will be held Friday evening. "It's kind of like the final chapter in the healing process," says Farr.

On Saturday, the house will come down. Farr says the pieces of the house will be trucked "to a location we aren't disclosing." The basement hole will be filled and the property leveled. Discussions continue on a memorial for the site, with one concept being a six sided gazebo structure. Anyone who would like to make a tax deductible donation to the memorial committee can contact Sue Hill at 715-478-2322.