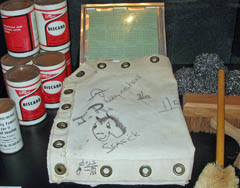 Three weeks on a troop ship to Vietnam gave G.I.s and Marines plenty of time for drawing. The Vietnam Graffiti Project's multi-dimensional exhibit, “Marking Time: Voyage to Vietnam,” is at the Wisconsin Veterans Museum in Madison through August. Curator Jeff Kollath says, like a lot of us, he assumed soldiers flew to Vietnam. “When I first became aware of this project, I was under that assumption as well,” says Kollath. But in fact, thousands of U.S. personnel made the sea voyage, and Kollath says that even there were a lot of shipboard actives for the men headed to Vietnam, there was also a lot of downtime. That's were the graffiti came in, as the men stretched out on their bunks and drew on the canvas above them. The exhibition includes several canvasses by men from Wisconsin.

The work was discovered on board the troopship General Nelson M. Walker in 1997, when the ship was anchored virtually untouched since the late 1960s. In addition to the canvases, the exhibit features over 100 original artifacts recovered from the Walker in 2005, when the vessel was scrapped.