You are here: Home / Crime / Courts / Heroin is back, more lethal than ever 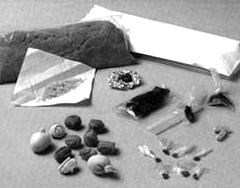 Heroin appears to be making a comeback in Wisconsin, and it's no longer just associated with middle aged “needle freaks.” Attorney General J.B. Van Hollen says users tend to be younger than in years past. “They're a lot younger, and we know that strictly by virtue of the busts we've had recently,” Van Hollen says, noting that recent arrests of a ring operating in the Waukesha area included suspects as young as 18.

Twenty-seven defendants are alleged to be involved in that Waukesha trafficking case, and Van Hollen says there's another difference: today's heroin tends to have increased purity, which in turn means, increased lethality and increased addictiveness, according to Van Hollen, who says the pure heroin has caused a number of deaths in Wisconsin.

And Van Hollen says used of the drug is no longer centered in Milwaukee and Madison. Heroin, he says, is moving into the suburbs and rural areas of Wisconsin as well. “I think people thought that it was a has been problem,” says Van Hollen, who says the availability of relatively cheap heroin has contributed to its new popularity.