You are here: Home / Crime / Courts / TROUBLE is what she's in 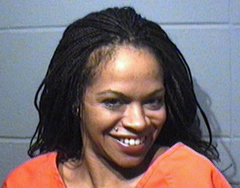 Is there anything motorists can do, to get out of a ticket? An Upper Michigan woman allegedly tried to woo a Wisconsin Dells police officer, who pulled her over  on suspicion of drunk driving. Elizabeth Kommes of Iron Mountain reportedly offered the cop sex — and $10,000. He rejected the offer.

Kommes was convicted of drunken driving in Wisconsin in 2000, 2001 and 2006, and in Michigan in 2007. Her driver's license was revoked in 2006. She's free on $1,000 bail after she was arrested and charged with fifth offence drunken driving and bribery of a public official, both felonies, and with misdemeanor operation after revocation. If convicted of the felony charges, Kommes faces up to six years in prison and $20,000 in fines. She is scheduled to appear in court next on Aug. 25.

Such offers to police aren't uncommon, according to Columbia County Sheriff's Lieutenant Wayne Smith, who's been on the road off and on for nearly 20 years. "When something like that comes up . . . that's a career decision," notes Smith, who says "none of those things has ever been worth my job."

Kommes had personalized license plates on her red Pontiac Grand Am, which read "TROUBLE."