You are here: Home / Recreation / Entertainment / Organizers thrilled with turnout at EAA 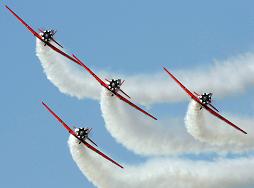 Attendance at EAA meets expectations, despite earlier concerns that fuel prices and the economy would keep people away.

Dick Knapinski at AirVenture in Oshkosh says it turned out to be an overwhelming week, with an estimated 540,000 in attendance.

"Naturally before the event we did get a lot of questions from the media and others whether fuel prices, the economy would have an impact on our event, but it turned out to be simply an outstanding week with our total attendance right around figures from previous years."

Knapinski says good attendance could be attributed to superb weather, variety of programs, aviation innovations, and the event's significance to the aviation community. It's like "aviation's family reunion," he says. Also, people not only showed up, they spent money!

"The exhibitors were very, very busy throughout the entire week. …everything from good sales to strong sales to some record-setting sales for some exhibitors."

In addition, visitors enjoyed appearances from John Travolta and Harrison Ford. Knapinski says their Ride Share program helped build attendance, as people split the travel costs to get to the event.

Also, the relative strength of other currencies against the dollar brought many visitors from overseas, an increase of nearly 25%. Knapinski says there were over 2,000 international visitors registered from 71 nations.

"It went very well weatherwise, programwise, exhibitorwise. The planning for 2009 has already started."

More than 10,000 aircraft made their way to the Oshkosh area for the event, touted as the World's Greatest Aviation Celebration.