You are here: Home / Business / Resurrecting the beer that made Milwaukee famous 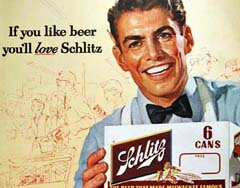 It's time to crack open a Schlitz. The beer that made Milwaukee famous is back on the shelves in bottles of its original formula, in the city where it was first brewed in 1849. The comeback is creating a buzz in Milwaukee, where stores were sold out within days. Leonard Jurgensen of Oconomowoc collects Schlitz memorabilia. He recalls the late 70s, when Schlitz literally went flat. “It had no head, it had no foam, and the brewery decided to put in a seaweed extract which would hold the foam,” says Jurgensen. “It worked pretty good, until it sat in a bottle for three months, and then you had floaters.” But now, he says they're back to the old recipe of the 30's and it's great. Jurgensen says Schlitz reminds fellow beer drinkers of better days.