You are here: Home / Politics / Govt / Doyle makes it a Leinenkugel 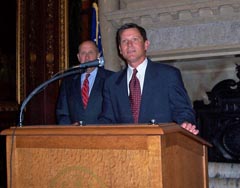 Governor Jim Doyle's pick to be Commerce Secretary brings a well known Wisconsin name to the job. Doyle's choice is Richard J. Leinenkugel, Vice President of Sales and Marketing for the Leinenkugel Brewing Company . Leinenkugel's family has operated their brewery at Chippewa Falls for 140 years. "Dick Leinenkugel comes from a family that has for generations run the kind of business that we must have here in Wisconsin to grow our economy," said Doyle as he introduced Leinenkugel at a Capitol press conference.

Leinenkugel's predecessor, Jack Fischer, resigned amid reports of expensive foreign trips, and Doyle clearly still thinks media made too much of that. "You know, when you go to Europe, it's pretty expensive these days," said Doyle. "It's not like going to Poynette." No worries on that score from Leinenkugel, who said his dad taught him to travel frugally. Still, Doyle said that if Wisconsin's economy is gong to grow, "we have to engage nationally and we have to engage internationally." Doyle said Leinenkugel is going to be "out on the road, selling Wisconsin," adding that Leinenkugel is "authentic, he talks staright, and he has a great story to tell the world about Wisconsin."

Leinenkugel is a graduate of Marquette Business School, a former Marine officer, and a little coy when asked about his political affiliations. "You know, I didn't know until today that the governor was Democratic," said Leinenkugel. "Because when I looked at his economic policies, I thought that they must have been from a Republican governor." Leinenkugel will begin serving as Secretary of the 400 person Department of Commerce on September 29.