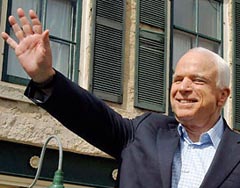 Republican presidential nominee John McCain made Wisconsin his first post-convention stop on Friday. McCain greeted an appreciative, partisan crowd in the Milwaukee suburb of Cedarburg, his first event after the Republican National Convention is St. Paul. “This turnout in Cedarburg is what our campaign is all about,” said McCain. “We're going to bring about change in Washington, D.C. We will not talk about it, we will do something about it.”

McCain played up his maverick image, said he's fought corruption, pork barrel spending and corruption in Washington, things he said have not always made him popular with his colleagues: “I was not elected Miss Congeniality in the United States Congress again this year.” McCain talked of his reputation as a fighter against pork barrel spending. “I've fought the big spenders, I've fought the pork barrelers . . . when I'm president, the first earmarked, pork barrel bill that comes across my desk, I will veto it. You will know their names, we will make them famous, and we will stop this corruption,” he said to cheers from the crowd.

McCain lit into Democrat Barack Obama , on the issue of taxes and spending. “I'll keep taxes low and cut 'em where I can. My opponent will raise your taxes,” he said as the crowd booed loudly. “Look at his record.” More boos greeted McCain's description of the Obama health care plan, which “will result in a government-run health care system that puts a bureaucrat between you and your doctor. We won't do that.”

“I've worked across the aisle again and again,” said McCain. “I've reached out my hand to those on the other side of the aisle, to work for the common good. Senator Obama never has. And that's why this ticket is the ticket to shake up Washington, and get things done for you.”

Accompanying McCain in Cedarburg was his running mate, Alaska Governor Sarah Palin. “The pollsters and the pundits, they forgot one thing when they wrote him off,” she said. “They forgot the caliber of the man of the man himself. The determination, the resolve and the sheer guts of Senator John McCain.”

The candidates remarks were greeted by cheers and chants of “U.S.A., U.S.A.” in Cedarburg , an affluent, mostly white community some twenty miles north of Milwaukee.