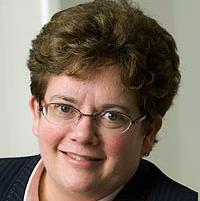 It might seem cheesy, but do you have an ice cream named after you?

This has been Chancellor Biddy Martin ‘s first official week on the job at UW-Madison. University of Wisconsin System President Kevin Reilly says it didn’t take the former Cornell University provost long to adjust to the community in the capital city.

“I could tell she was integrating well quickly when I found that she’s already had a campus ice cream flavor named for her … ‘Strawbiddy Swirl.'”

Babcock dairy plant on the UW-campus offered its new creation to students, staff and faculty Thursday as they mingled with the new chancellor and sampled the new dairy dessert.

Martin says she’s honored to have the acknowledgment from Babcock, especially here in America’s Dairlyland.

“Having the College of Agriculture and Life Sciences decide that they were going to work with a range of partners to come up with a new ice cream flavor in my honor means … it would mean a lot anyway, but for it to happen in this state – in our Dairy State – in means even more.”

The Big Cheese at the University says she just might have to stock up on the ‘Strawbiddy Swirl’ ice cream and send a supply to friends and family.

The ingredients, by the way, include vanilla ice cream base with strawberry slices, strawberry marble and dark chocolate flakes in it, and it is supposed to taste like chocolate-covered strawberries.